Then I was ready to go to my next destination. 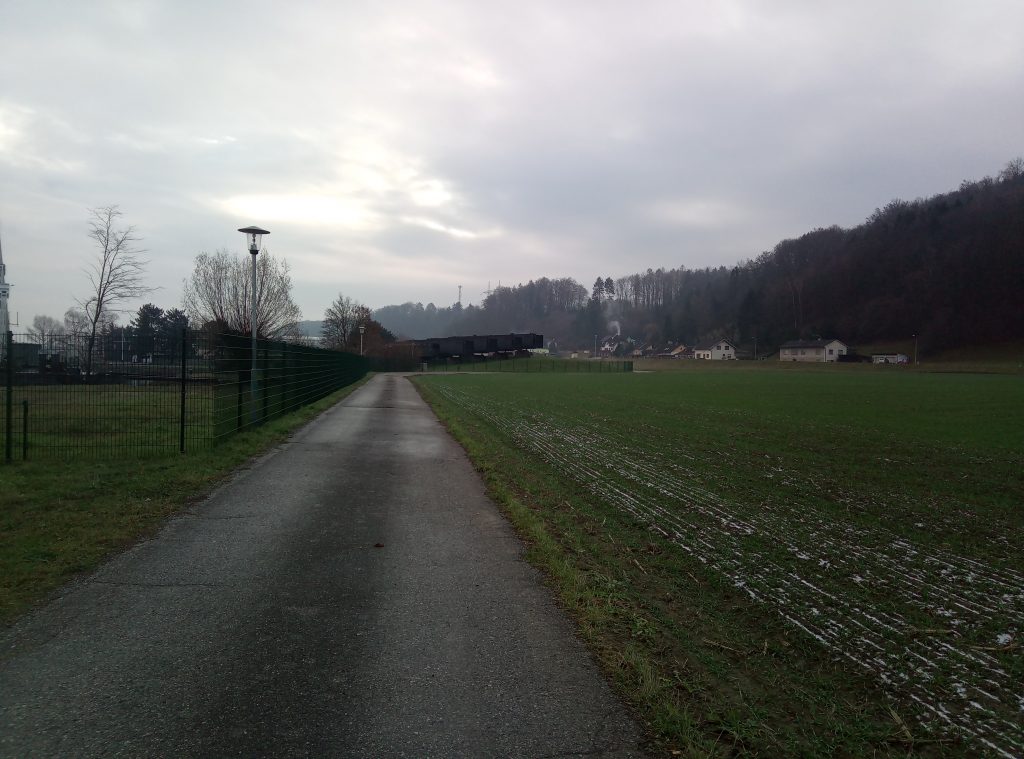 As I was walking towards the hydroelectric dam near Ybbs, I passed by a dock where there was all kinds of stuff for maintaining for the dam. 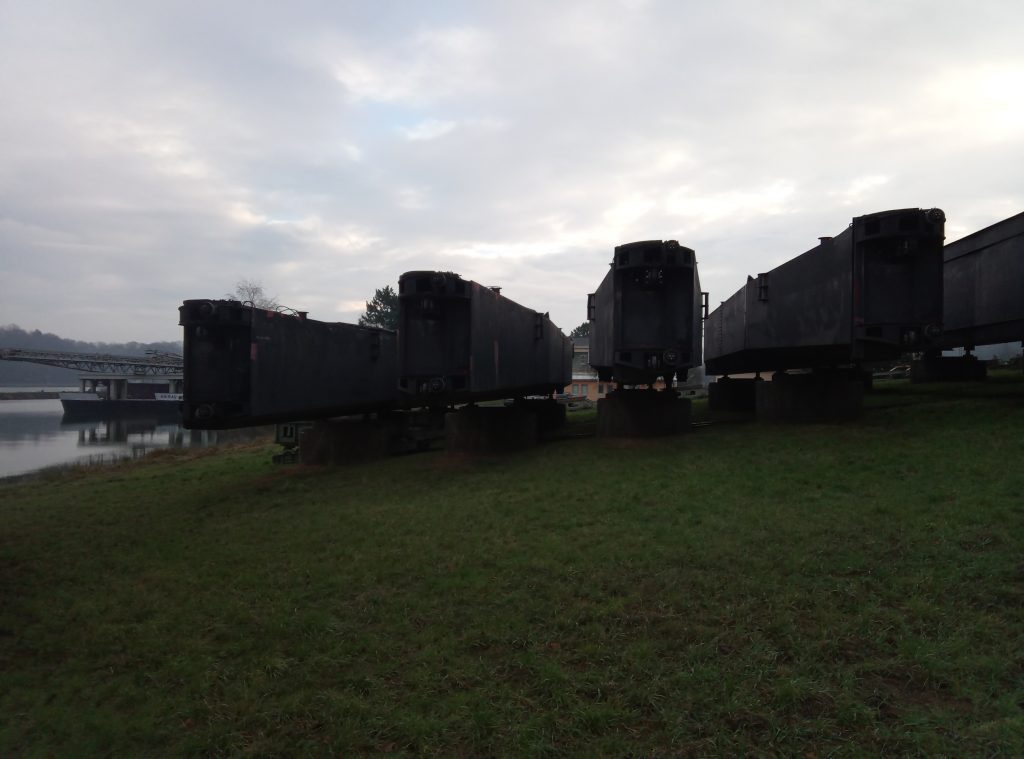 The water level difference was at least 10 meters. As you can see very well on the photo with the locks. 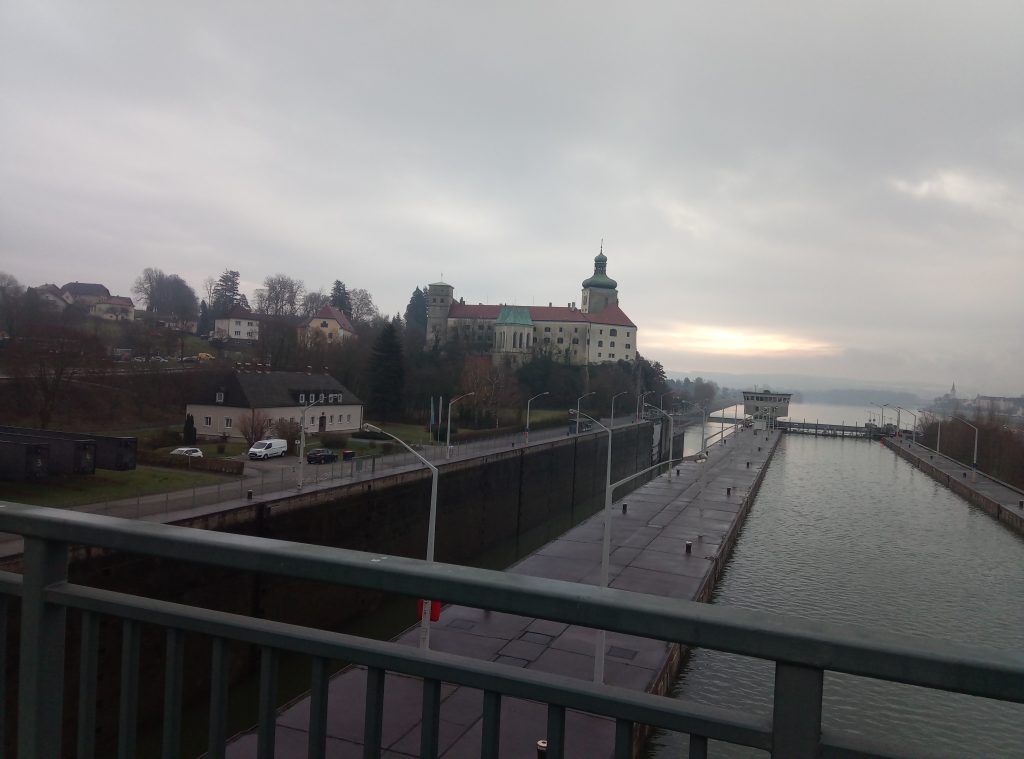 On the north side of the Donau I passed by a doctor practice, I went in to go to the toilet and brush my teeth and fill my water.
Then I went eastwards. I walked by an physiotherapist and then there was a man two houses back who was calling me for some reason. First I didn’t know why, but then he said I had to come into a building. And there he stood with a market stall with maps and other stuff of the area. It was helpful to have some information and it was nice that someone wanted to help me. After that I wanted to go eastwards again, but then again I passed by the physiotherapist and I decided to go in because my back was still hurting. That was one of the best decisions I made on my journey so far. I sat in the waiting room where it was really nice and warm, like really warm I think at least 25 degrees. Then the physiotherapist was finished with is other client. He had time to take a look at my back. So I layed down on his bench. He told me one of my vertebrae was not in the right place.
He was very skilled and found the problem quickly. He started to work my side back thoroughly and addressed all of my back and put the vertebrae back in the right place by pulling them and crushing them down. I don’t know what the right terms are but, it makes a lot of sound. When he was putting all my vertebrae back in the right place, on a scale from 9 to 10 how much I could handle the pain it was a 9. So that was really intense. But it was definitely a relief for me. I paid 20 euros, so that’s not expensive at all. I was in the mood for asking an invoice. There was a really big gift box, which was probably a present for him for the holidays. He gave the whole box to me.

Because a lot of tension was released from my body, the only thing I could do after that was crying. Because it was really nice that he had helped me, even when I didn’t have an appointment and also giving chocolate to me. So I was really happy and my back hurt in a different way, bit better. I put the chocolate in my backpack and I walked into the kitchen. When I came back he also gave me his advent tea.
I left the practice and started to follow the Jerusalem way again. But this was not easy because my body, needed to adapt to the new situation. The pain in the middle of my back had changed, it was like there was some kind of needle sticking in it and that was exactly the spot where my backpack pushed against.
I walked by a restaurant and I ordered a warm chocolate and soup.

I sat there a while to recover. Meanwhile I wrote some postcards. 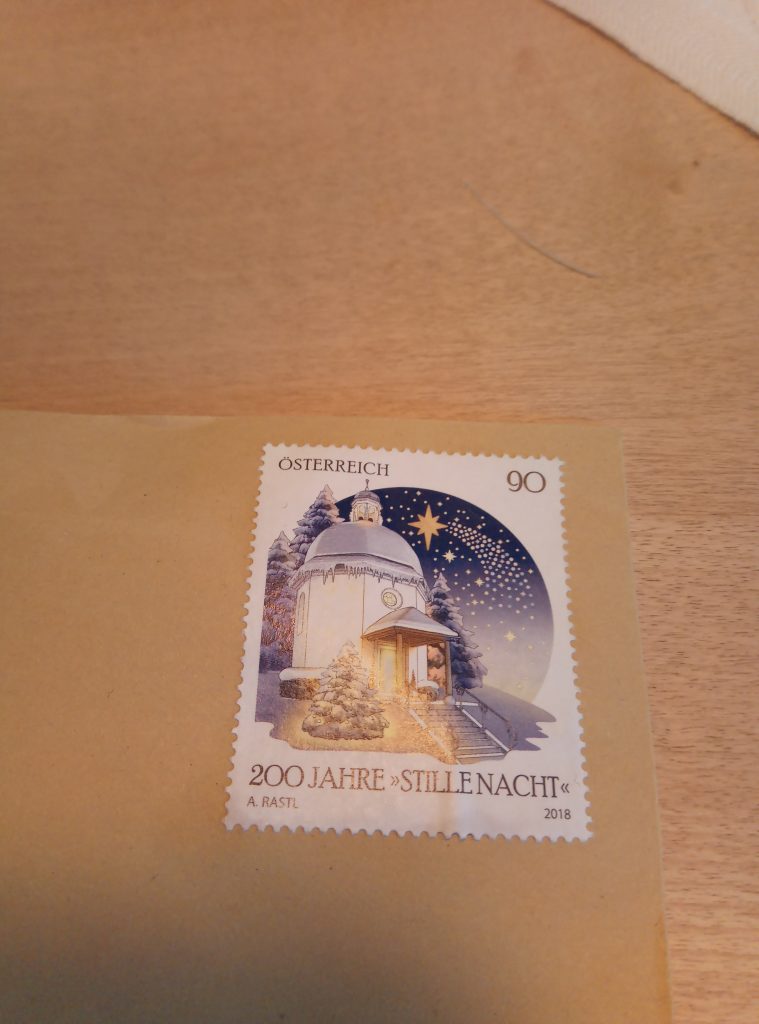 The treatment had been so intense that I decided that it was better to take the bus to Melk instead of walking. In the public transport app there were two options, one of them was 40 min and the other one 1 hours and 35 minutes. I took the second option, but the bus driver didn’t understand why I took the long ride. I took the long ride because I would be longer in a warm bus, seeing more and for the same amount of money.
Immediately when we went Into the mountains, there was a lot of snow. I think at least 20 or 30 centimeters at some places. So I saw a lot of things I wouldn’t have seen if I had taken the other way.
When I arrived in Melk I sat at the station and wrote my blog and then went into town. It was already dark. At the church they didn’t have a sleeping spot so I decided to put up my tent.